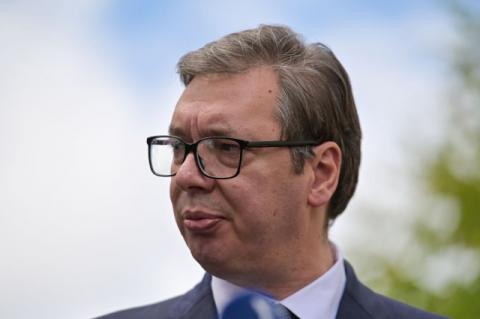 Answering the questions of the journalists, Vui referred to the events in Kosovo and Metohija.
President said that he would never be able to say that it was wonderful that Srecko Sofronijevic was wounded.
"It was enough for me to tell people, 'Read your statements,' I said we want the best relationship with the UK, which is true, with Great Britain, because they are a great power, but read that statement from Pristina. You can't say anything else about that except 'don't insult our intelligence.' Let's leave aside the fact that you have no right to invade the north of Kosovo, you know what we agreed on in Brussels, don't do that."
"You expect us to say: 'It's wonderful that you shot Sreko Sofronijevi', I can't and won't say that. What would have happened if Sofornijevi had died?", Vucic said.

"Moderna will arrive in Serbia in November," Vucic said.
He emphasized that the immunization with the Russian vaccine produced in Torlak in Serbia will start soon.
"We have a million and a half doses at the moment," says Vui and revealed that he will soon be vaccinated with a booster dose, that is, that he will receive the third dose of the Chinese vaccine.

The ceremony started shortly after 11 o'clock.
Vui and BIA director Bratislav Gai laid a wreath in front of the memorial wall in memory of the fallen members of the Agency. "BIA is a pillar of defense against terrorism, foreign services, BIA is the service that gives you security, independence, autonomy, without its successful work, nothing would happen," said Vucic.
Vui said that BIA can respond to the challenges of modern society.
"Wonderful people in BIA have dedicated their lives to the security of this country, the fight against...