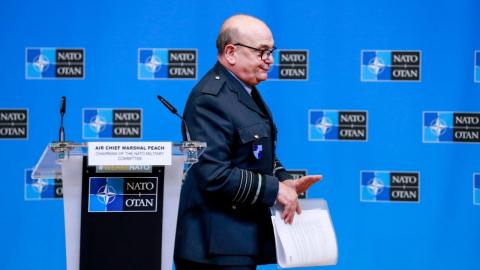 "The Western Balkans are experiencing the biggest threat to their stability and security in over two decades. We have a responsibility to do all we can to preserve the gains achieved through peace and dialogue - we cannot allow any return to the violence and division of the past," Johnson said.

Peach, 65, will take on the new role after he stepped down as Chairman of NATO's Military Committee early this year, a position he held since 2018.

The appointment comes in a time when Bosnia and Herzegovina is experiencing threats to its unity and when relations between Kosovo and Serbia are more than usually tense.

The British government said that Peach will work with Western Balkans leaders, with others across the region and with the US and Europe to support and strengthen regional stability.

"In Bosnia and Herzegovina, Sir Stuart's work will support that of the international High Representative, Christian Schmidt, who continues to have the full support of the UK. On Serbia and Kosovo, he will work with our partners in support of the EU-facilitated Serbia-Kosovo Dialogue," the statement from London said.

UK Foreign Secretary Liz Truss called Peach's appointment "a clear demonstration of Britain's commitment to the Western Balkans and to the defence and promotion of freedom and democracy in the region".

Peach was deployed as NATO Air Commander (Forward) in Kosovo in 2000. He went on to be Chief of Defence Intelligence in 2006, Chief of Joint Operations...