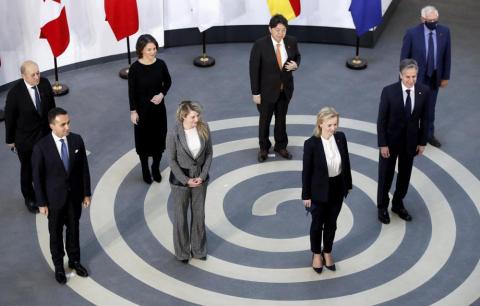 Top diplomats from the Group of Seven industrialized nations met on Dec. 11 in Liverpool for talks dominated by Russia's buildup of troops near Ukraine's border and what host country Britain called Moscow's "malign behavior" around the world.

The U.K. called for "a show of unity against global aggressors" as it welcomed U.S. Secretary of State Antony Blinken and other G-7 foreign ministers amid the Russia-Ukraine crisis and tensions with China and Iran.

"We need to defend ourselves against the growing threats from hostile actors," British Foreign Secretary Liz Truss said as she opened the meeting of foreign ministers from the U.K., the United States, Canada, France, Germany, Italy and Japan. "And we need to come together strongly to stand up to aggressors who are seeking to limit the bounds of freedom and democracy."

The U.S. and its NATO allies are concerned that the movement of Russian troops and weapons to the border region with Ukraine may be a prelude to an invasion and have said they would inflict heavy sanctions on Russia's economy if that happens.

Moscow denies having any plans to attack Ukraine and accuses Kyiv of its own allegedly aggressive designs.

A senior U.S. official who participated in Saturday's discussions said the G-7 ministers were united in their "extreme concern" about developments on the Russia-Ukraine border. The official said the ministers greed that any Russian invasion of Ukraine would be met with a response that would bring "massive consequences and severe costs" from the G-7.

The official would not elaborate on what those consequences might be but said they would be implemented "very, very fast" if Russia did not heed warnings to back down.

The U.S. and its allies have played down talk...