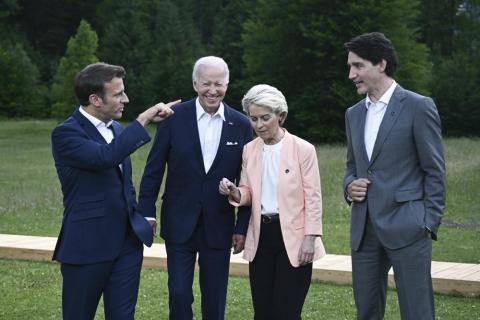 The Group of Seven economic powers are set to commit themselves to supporting Ukraine in the long haul, with the U.S. preparing to announce the purchase of an advanced surface-to-air missile system for Kiev, as leaders meet in the German Alps and confer by video link with Ukrainian President Volodymyr Zelensky.

The G-7 leaders will begin Monday's session of their three-day summit with a focus on Ukraine. Later, they will be joined by the leaders of five democratic emerging economies , India, Indonesia, South Africa, Senegal and Argentina, for a discussion on climate change, energy and other issues.

The war in Ukraine was already at the forefront of the G-7 leaders' minds as they opened their summit at the secluded Schloss Elmau luxury hotel on Sunday , just as Russian missiles hit the Ukrainian capital of Kiev for the first time in weeks.

President Joe Biden said Russian President Vladimir Putin "has been counting on, from the beginning, that somehow NATO and the G-7 would splinter, but we haven't and we're not going to." Britain's Boris Johnson warned the leaders not to give in to "fatigue."

On Monday, they have the opportunity to demonstrate that unity to Zelensky and reaffirm their commitment to supporting Kiev financially and otherwise.

Biden is set to announce that the U.S. is providing an advanced surface-to-air missile system to Ukraine, as well as additional artillery support, according to a person familiar with the matter, in the latest assistance meant to help the country defend against Russia's bloody invasion.

The U.S. is purchasing NASAMS, a Norwegian-developed anti-aircraft system, to provide medium- to long-range defense, according to the person, who spoke on the condition of anonymity. NASAMS is the same...

US to work with Taiwan, Vietnam against illegal fishing

Erdoğan calls on Russia, Ukraine to return to talks

We will continue to enhance our relations with African countries: Erdoğan