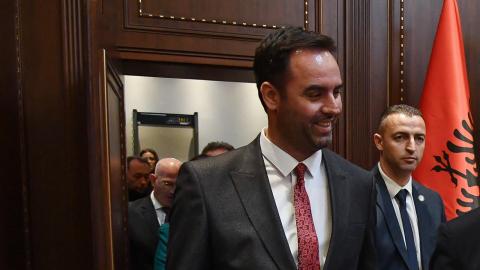 Glauk Konjufca said on Tuesday that he has decided to dismiss several heads of diplomatic missions from their position abroad, including Kosovo's ambassador to Washington, Vlora Citaku.

Konjufca said that Kosovo's representatives in Bulgaria, the Netherlands, Hungary, France, Montenegro and Switzerland should also be discharged from their positions.

The announcement came after he dismissed 14 consuls around the world. A majority of them were reported to have had political or family ties with senior party officials or political parties.

"There will be a lot of decisions of this nature," Konjufca wrote on Facebook in a post explaining the reasons behind his actions.

"From the beginning of my mandate, I have pledged to establish law and order in the Ministry of Foreign Affairs and the diaspora. One of the next steps is a request for the return of political ambassadors who have completed the four-year mandate foreseen under the laws in force in the Republic of Kosovo," he added.

Any proposal from the government for the appointment or dismissal of heads of diplomatic missions requires presidential approval. President Hashim Thaci's office told Telegrafi newspaper that no such proposal has been formally received yet.

But Citaku, Kosovo's ambassador to Washington, said that she accepts the government's decision.

"Although it's clear to me that only Kosovo's president is entitled to appoint and dismiss Kosovo ambassadors, for me it's enough that it is a well-known fact that I am not wanted. However, I consider that I deserved prior consultation about the proposal," she wrote on Facebook.

The announced dismissals come after Citaku was caught up in a scandal when she misinformed President Thaci recently that Jamaica...