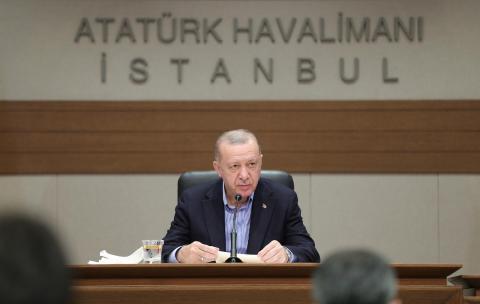 President Recep Tayyip Erdoğan has said he will discuss all the aspects of the Turkish-American ties with U.S. President Joe Biden in their in-person meeting on the sidelines of the NATO Summit in Brussels, specifying the latter's categorization of the 1915 events as genocide and the U.S. exclusion of Turkey from the F-35 fighter project.

"It will be our first in-person meeting since [Biden] came to power. Obviously, we have to talk over the Turkish-American relationship. There were a lot of rumors inside and outside. We have to leave all these behind and speak about we can do together," Erdoğan told reporters at a press conference before his departure to Brussels on June 13.

There are so many issues on his agenda with Biden, Erdoğan said, specifying the American president's characterization of the 1915 events as genocide. "This approach has seriously upset us. It is not possible for us not to bring this up," he stated, recalling that this was not a move in line with the spirit of NATO alliance.

Another issue he said he will raise is the U.S. exclusion of Turkey from the F-35 stealth fighter project although Turkey has been making its payments properly and producing around 700 pieces of the fighter jet. "In this regard, America does not fulfill its words and does not comply with the contract, although Turkey has fulfilled its responsibility," Erdoğan said, criticizing the U.S. for not sending five aircraft Turkey has already paid for.