Vučić: "If the Albanians decide to launch an offensive, we won't hesitate" VIDEO 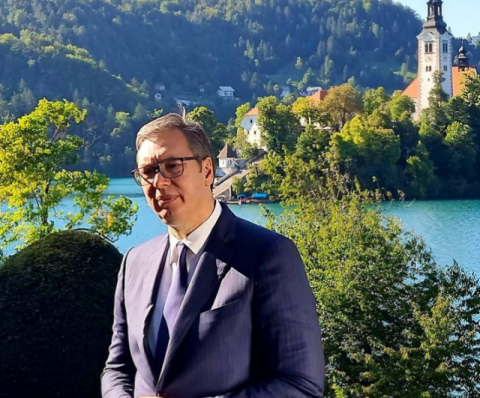 European perspective of Serbia, our tasks, but also about the situation in Southeast Europe was being discussed.
"We have fulfilled the promise that we will raise the level of compliance with the foreign policy decisions of the European Union, from 46.28 we have raised it to over 62 percent," Vucic said.
"There is not enough desire for enlargement until the EU takes care of its own problems. Elections are awaited in Germany, France, it is complicated, and what I can say is that only China is being talked about off camera. It is clear what the preoccupation of Europeans and Americans is. However, we must get closer to everyone in the region and I am proud of the "Open Balkans" initiative - said Vucic.
He said about the Open Balkans that this initiative is in the interest of Serbia and that Serbia should stand up for it, without expecting support at any time. He said that Borut Pahor did not criticize the initiative, but that he was not thrilled either. Vui, as he says, does not see anything strange in that. "It is important for us to understand that interests always rule, because their interest would be for Serbia to grow and develop," he said.
"The question is who would be happy about that. Of course, there are more dissatisfied than those who are happy. We are here to understand that. These are our interests and we ourselves need to understand that we can help ourselves," Vucic added.
Vui warned that the false state of Kosovo will launch a campaign to join various international organizations. President of Serbia said that he had talked to Charles Michel. According to the President, Serbia is trying to protect and preserve its national interests, and the meeting focused on dialogue, the rule of law in Serbia and further efforts that...

Germany's Largest Mosque will call for Friday Prayers Over Loudspeakers