Turkey's air force pulls out of military exercise in Athens 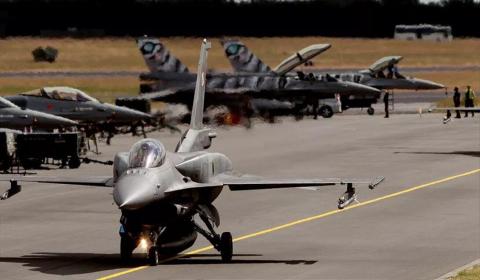 Turkey's air force has pulled out of a military exercise scheduled to be held in Greece next month, security sources said on April 30 saying that preparatory documents singled out Ankara.

The military exercise dubbed "Tiger Meet" is intended to promote solidarity between the participating states' fleets and is held annually.

This year, it will take place in Athens between May 9 and 20.

Turkish security sources said host countries draft a text each year made up of technical regulations ahead of the planned exercise and this year, Greece targeted Turkey in the said document.

The sources accused Greek authorities of making additions into the document that "abuse disagreements between the two countries," without providing precise details.

According to Turkish authorities, the additions were "intentional" and prompted the air force command to ask for changes.
But Greece did not accept them, the sources said.

Turkey decided to snub the event on the grounds that "Greece manipulates Tiger Meet for its political interests" and informed Greek authorities of its move on April 22, they added.

Turkey on Friday accused Greek warplanes of violating its airspace over the Aegean Sea, which Turkish security sources said happened 30 times in 72 hours.