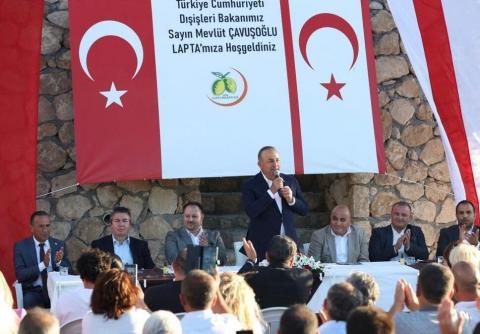 "Now there needs to be a two-state solution [in Cyprus]. Negotiations need to be initiated between two equally sovereign states. We explain this position on every platform, both as TRNC [Turkish Cyprus] and Turkey," Çavuşoğlu said, speaking at a joint press conference with Turkish Cypriot Foreign Minister Tahsin Ertuğruloğlu.

"Our stance on the negotiation process is clear. We also met with United Nations [UN] Secretary-General Antonio Guterres in New York, we say on every platform, our position is clear," he said, adding that Ankara conveys the same message to relevant countries and the European Union (EU).

There is a "propaganda" of the Greek side and Greece as if the Cyprus problem started in 1974, he said, adding, "On the other hand, we are emphasizing our just cause, which tells us that the problem started in 1955 and what happened in 1960 and after. We are also making great efforts to increase the visibility and status of the TRNC on the international platform. We intensified our contacts to open new representative offices in countries deemed appropriate by the TRNC."

"Now a new page has been opened in Cyprus," Ertuğruloğlu said for his part.

"The negotiation process, which lasted almost 60 years and was called 'intercommunal talks,' collapsed in Crans-Montana in 2017. As of 2017, a new page has been opened. There are two separate sovereign equal states and two states with equal international rights on this Island," he stated.

Ertuğruloğlu said that the negotiations in Cyprus can only start on the basis of the existence of two sovereign equal states and to shape the future with good neighborly...