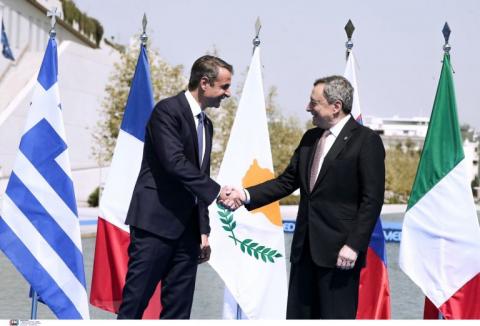 A day before the EU Summit, Athens, turns its attention to Rome, focusing on the dinner Mario Draghi has invited the Greek PM to on Wednesday night. Government sources describe the Italian prime minister's table with his Greek counterpart as a one-on-one meeting that will help build closer relations.

Greek-Turkish relations on the table

Athens is expected to remind Rome of the Greek-Italian agreement on the delimitation of maritime zones as a model for the implementation of international law, as well as international legitimacy and cooperation of coastal states in the region, in an attempt to contrast it with Turkish illegal actions.

The momentum created by the Russian invasion of Ukraine offers Greece the opportunity of using it to condemn Erdogan's revisionist policy and threats against territorial integrity. This in no way means that Rome and Athens see eye-to-eye.

Personal opinions are one thing and international politics are another

Despite the fact that Mario Draghi seems to harbor little tolerance for Erdogan, calling him a "dictator" last year, this does not mean that he will sever ties with Ankara. It is indicative that in the shadow of the Russian invasion of Ukraine, and given the Turkish refusal to say "yes" to NATO accession for...