From Carter to Trump 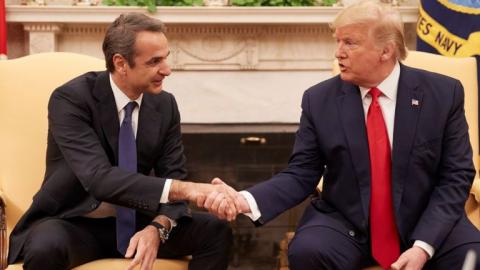 Prior to the 1976 US presidential election excessive expectations were cultivated among Greeks regarding the expected election of Jimmy Carter.

The candidate was depicted as a philhellene and much was invested in his electoral victory.

Most people including those in Greece and Cyprus were convinced that Carter would stand up for Greece's rights and exercise the greatest possible pressure to reverse the disastrous de facto situation that resulted from the Turkish invasion of Cyprus.

The paroxysm was such that cartoonists at the time depicted Carter with the traditional costume of the Greek presidential guard - the foustanela skirt and tsarouchi shoes.

Carter's election triggered an emotional reaction in all Greeks.

In  Cyprus then president and archbishop Makarios ordered that the church bells ring joyously throughout the island and many state services operated for only a half day right after the US election.

Not long afterwards, in 1978, President Carter prepared and imposed the lifting of the US arms embargo on Cyprus which was in place since the 1974 Turkish invasion.

There was great disappointment and since then UN initiatives to solve Greek national issues have been viewed with suspicion and expectations have been tempered.

In the current phase many hoped for an American intervention to subdue Turkish aggressiveness.

The left-wing SYRIZA government had laid the groundwork and almost completely identified with US policy, as with ex-PM Alexis Tsipras' embrace with Donald Trump.

There was an abundance of warm repartee during Kyriakos Mitsotakis' recent visit to Washington.

President Trump praised Greece's efforts to exit the crisis and...