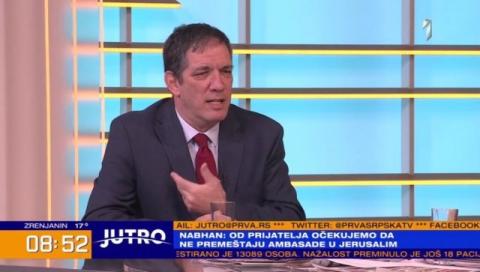 "Don't get me wrong, that's an important topic, but it's a different story. Israel's decision to recognize Kosovo's independence was made under American pressure, otherwise let's not forget that it was done within the framework of the agreement between Serbia and Kosovo and America, not us. I am not trying to hide behind that, that decision was made by Israel after many years of refusing to recognize Kosovo. It is against our interests in Serbia," he said.
Asked whether Israel would revise its decision on Kosovo, the ambassador said he did not want to make any room for optimism for the Serbian public.
"I do not see that possibility at the moment. An agreement has been reached, Israel has recognized Kosovo, and Kosovo will move the embassy to Jerusalem. I do not see it withdrawing recognition of Kosovo as long as both sides have accepted it in the agreement," he said.
At the insistence of TV Prva journalist Filip Cukanovic that Serbia did not recognize the independence of Kosovo by any agreement, and that he himself was in Washington when the agreement was signed, the ambassador says that he did not see that agreement. "Why would I see that document, it is not my agreement, Serbia signed that document. I did not see any denial from Serbia and United States of America. Serbia never denied that it signed that document. I did not see anyone in Serbia say that they did not sign the agreement, the document exists as far as I know", he said.
The Minister of Foreign Affairs of Serbia, Nikola Selakovi, responded to these accusations on Prva TV.
Selakovic said that the statement of the Israeli ambassador that Serbia "recognized" the so-called Kosovo is absolutely incorrect and it is "rather rude".