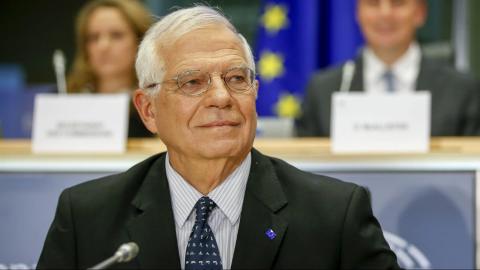 Questioned by Latvian MEP Sandra Kalniete on whether his current role as Spain's foreign minister might bring his integrity into question - as Spain is one of five EU countries that do not recognise Kosovo - Borrell responded that the EU was "diverse in recognition [of Kosovo], but united in engagement".

Precisely because Spain was one of five EU countries withholding recognition, Borrell said he wanted to visit Pristina "for obvious reasons".

Borrell further insisted that Serbia and its former province "must reach an agreement", calling the current status quo "untenable", and added that continued EU-led negotiations "must be taken into the utmost consideration," with demands for a more honest dialogue, particularly from Serbia.

Looking back on the past negotiations, he said they had taken too long, while also conceding that as long as "Russia, India and China don't recognise Kosovo, [it] will not be a full-fledged [UN member] state".

Borrell has shown interest already in the Kosovo-Serbia negotiations, having made clear Spain's opposition to a proposed territorial swap along ethnic lines as part of a lasting solution.

Later in the hearing, Borrell emphasised that the Balkans generally would be his priority, because if "we as Europeans can't solve a problem in the immediate vicinity, then we can't be a world power".

That the Balkans were high on his list of interests could also be gleaned from his response to another question, when he said: "I don't like borders and the first thing we should do in the Balkans is abolish the borders."