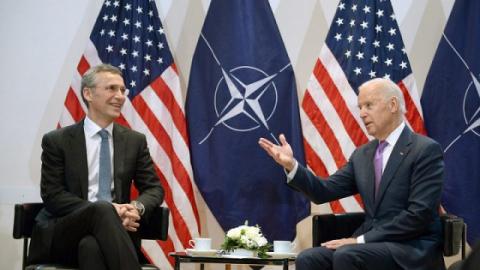 After an identity crisis over the past years, NATO leaders will gather in Brussels on Monday (14 June), for a summit to re-orient the alliance, sandwiched between the G7 summit in Britain and an EU-US summit right after.

After four acrimonious years under the Trump administration, Biden's arrival will not make the challenges go away.

Since taking office, US President Joe Biden had made efforts to reassure European allies about the US' commitment to multilateralism, by hailing NATO as 'cornerstone of transatlantic security' and reversing Trump's withdrawal from Germany. But has the transatlantic rift, caused under former US President Donald Trump vanished?

"President Biden is coming to Europe with some strong messages on revitalising America's alliances, starting with NATO - he will make clear that the strong US commitment to NATO and also our commitment to Article 5, the mutual defence clause," Douglas Jones, Chargé d'Affaires of the US Mission to NATO, told EURACTIV ahead of the meeting.

Article 5 is the Holy Grail of the alliance. It stipulates that collective defence means that an attack against one ally is considered as an attack against all allies. However, there have been doubts in the past whether in case of a Russian attack over a vulnerable member such as Lithuania or Estonia, France, Italy or Spain would indeed come to aid.

Also, as the relations between the West and Russia continue to deteriorate, there are concerns that Russia and China will team up even further.

Growing political and military cooperation between Russia and China poses "new dangers" for NATO and threatens multilateralism, NATO Secretary-General Jens Stoltenberg said last week, which is why the alliance, "must...