Athletes return from Olympics with sense of togetherness 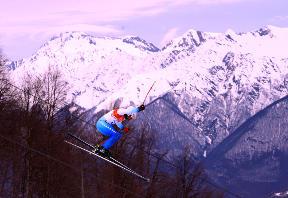 The region's Olympians, like alpine skier Igor Laikert of BiH, returned home from Sochi this week with many memories. [AFP]

Athletes return from Olympics with sense of togetherness


Memories of friendship and solidarity were forged among athletes from the Balkans and Turkey during the 2014 Sochi Games.

The region's Olympians, like alpine skier Igor Laikert of BiH, returned home from Sochi this week with many memories. [AFP]

As the 2014 Olympics came to a close in Sochi, Russia, on Sunday (February 23rd), the 88 athletes who represented Southeast European nations and Turkey made their way home with indelible memories.

In spite of pre-Olympic concerns about security in Sochi and the outbreak of violence in Ukraine during the Games, the Olympics remained an event that creates a feeling of togetherness and camaraderie for the participants.

Tugba Kocaaga, an alpine skier who teaches at Abant Izzet Baysal University in Bolu, represented Turkey in the Olympics for the second time, competing in the women's giant slalom.

"I already have a very good friendship with the athletes from the Balkan countries since years of participation in sport events. I have many friends from Bosnia, Bulgaria, Romania, Greece, Macedonia, Serbia and Croatia, we even gathered up in a summer holiday in Turkey a couple of years ago, while some of them attended a wedding ceremony," Kocaaga told SETimes.

"For the moment, we haven't got any joint project, however when there are sportive competitions in our respective countries, we are inviting each other," she added.

Kocaaga, who characterised her sporting philosophy as "think positive," said the atmosphere at the Olympics is distinctly different from other sport events.

"The spirit of the Olympic games resides in the fair play, based on solidarity and brotherhood. So, we all leave behind the...

Lavrov: Moldova could be the next Ukraine

Bulgarian Exports to Romania Increase by over 40%

Austria and the Netherlands are "United in Opposition to Schengen Expansion"