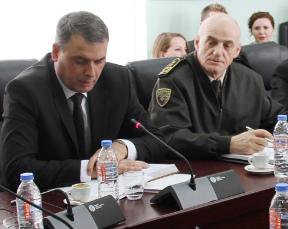 Senior officials from the Kosovo Security Force visited NATO headquarters to discuss the force's transformation into an army.

Kosovo is looking to become a member of the NATO Partnership for Peace Programme, and the country is seeking more access to Alliance exercises and training in order to help the Kosovo Security Force (KSF) transform into an army.

KSF Minister Haki Demolli and Force Commander Lieutenant General Kadri Kastrati led a delegation on a two-day visit to Brussels at the invitation of the US Mission to NATO on March 2nd. Officials discussed the process of the KSF transformation in "close co-ordination with the international partners."

Major Remzije Zeqiraj, a spokesperson for the KSF, told SETimes that Kosovo is hoping for the institutionalisation of its relations with NATO.

The NATO Liaison and Advisory Team (NLAT) mediates contact between the Alliance and the KSF. It also plays an advisory role to the KSF, and assists the force in raising its capacities.

"The KSF has actively participated in joint working groups with NLAT for the identification and selection of courses at NATO schools. It is worth noting that for the first time, members of the KSF have developed training in NATO schools," Zeqiraj told SETimes.

She added that in 2014, five KSF members followed three courses, and that this year 19 KSF members are planning to participate in 10 courses.

"Our strategic orientation is membership in and co-operation with NATO, which is very important for Kosovo's security and international co...