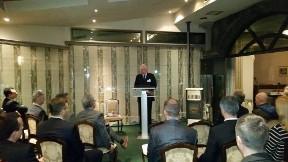 The British Embassy in Macedonia held training for 30 high-ranking officials in the security sector.

A strategic leadership course held recently in Ohrid emphasised the need for armed forces across the region to train personnel to deal with the world's emerging security challenges.

Organised by the British Embassy in Skopje, the training focused on command and management in strategic areas in order to develop inter-cultural leadership and critical decision making in complex situations.

"The course in Ohrid was highly successful in enabling delegates to develop their knowledge on leadership and senior-level management in the security and defence sectors. The course provided a forum for the exchange of ideas and experiences from delegates across the Western Balkans and neighbouring regions," said Richard Parry, defence attaché from the UK for Macedonia, Albania and Kosovo.

Parry said the UK puts high emphasis on the development of leadership at all levels, from young officers to senior military commanders and civil officers.

"The UK is a strong supporter of developing leadership knowledge and skills across the Western Balkans region. Young men and women...