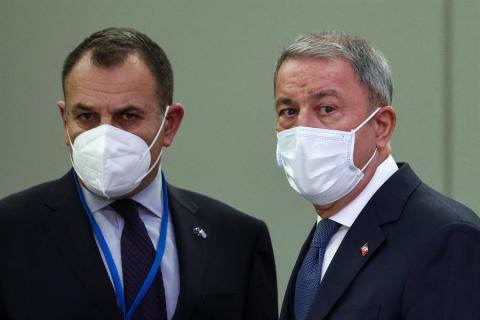 Defense Minister Hulusi Akar on Feb. 16 attended NATO meetings in Brussels amid a crisis between the Alliance and Russia over the latter's military build-up in eastern Ukraine. Akar also had a bilateral meeting with his Greek counterpart after a fresh debate between the two neighbors over the status of the Aegean islands.

NATO defense ministers discussed plans to strengthen the southeastern wing of the alliance, including the deployment of a battle group in Romania and battleships in the Black Sea region.

Western states are engaged in one of the deepest crises with Russia in decades, as Moscow wants to stop the former Soviet neighbor from ever joining NATO.

On the sidelines of the meeting, the Turkish defense minister met with NATO Secretary-General Jens Stoltenberg.

The meeting of Akar with his Greek counterpart comes at a time when tensions between Ankara and Athens heightened over a war of words as Turkey accuses her neighbors of arming the Aegean islands that must be kept demilitarized according to international law.

Turkey blames Athens for continued provocations in the Aegean Sea and inflammatory rhetoric and actions. The latest of such moves came from Greek Deputy Defense Minister Nicholas Hardalias, who paid visits to the islands nearest to the Turkish coasts with demilitarized status.

Turkish Foreign Minister Mevlüt Çavuşoğlu, in a strong reaction to the Greek moves, stressed the sovereignty of these islands could be challenged if Greece continues to...