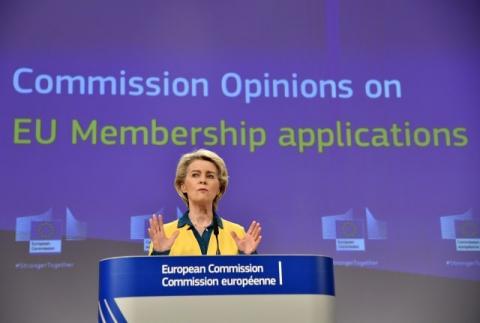 "Ukraine has clearly shown the country's aspiration and determination to live in accordance with European values and standards," she told reporters in Brussels.
She also stated that Ukraine has already applied about 70 percent of the rules of norms and standards of the EU, but that important work remains to be done in the field of rule of law, anti-corruption policy and fundamental rights. "The process is based on merit, so the process depends entirely on Ukraine," Ursula von der Layen stressed. While giving a public statement, Ursula von der Layen wore the colors of Ukraine, a yellow jacket over a blue shirt, according to the British agency.
Reuters reminds that some EU countries, including the Netherlands and Denmark, oppose more countries gaining candidate status, and that the request of Ukrainian President Volodymyr Zelensky received support from France, Germany, Italy and Romania, whose leaders visited Kyiv.