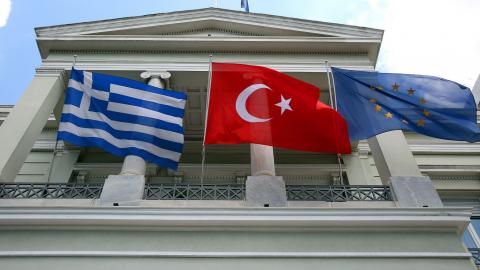 (L-R) The Greek, Turkish and European Union (EU) flags wave outside the Foreign Ministry building before a meeting between Greek Foreign Minister Dendias and his Turkish counterpart Cavusoglu, in Athens, Greece, 31 May 2021. Photo: EPA-EFE/ORESTIS PANAGIOTOU

Dangerous tensions are brewing in the Aegean Sea, turning up the temperature of what is an already hot summer. After Greek moves to fortify islands over which it claims sovereignty close to the Turkish coast, Turkish leader Recep Tayyip Erdogan issued some ominous tweets, hinting at the use of force to defend Turkey's 'rights' in the Aegean.

Tensions between Ankara and Athens over scattered rocks in the Aegean Sea are nothing new. However, they come at a particularly dangerous moments, when ruling parties in both Greece and - in particular - Turkey face falling popularity ahead of elections due next year. Perfect conditions for unnecessary escalation and muscle flexing.

An EU flag flies outside the UK parliament in London, Britain, 15 June 2022. The EU has announced that it is planning legal action against the UK government over its plans to scrap parts of the Northern Ireland protocol post-Brexit deal. EPA-EFE/ANDY RAIN

In line with tradition, the June European Council summit had enlargement as an item on its agenda this year. Largely in response to the Russian invasion of Ukraine, the EU opted to grant Ukraine and Moldova formal candidate status.

Yet it also delivered little or nothing for long-standing candidates in the Western Balkans, making the extension of candidate status to new hopefuls ring rather...