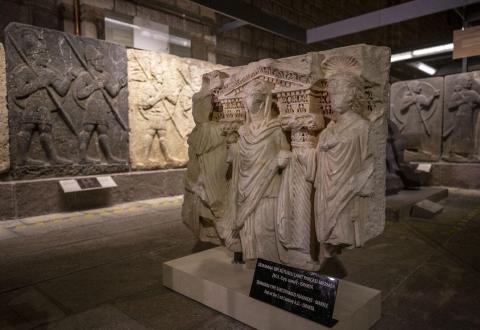 A total of 4,862 cultural assets were returned to Turkey between 2003 and 2021, according to data given by the Ministry of Culture and Tourism.

In this framework, 4,862 works have been brought to Turkey since 2003, with 423 of them been returned in the first six months of this year.

As a result of the efforts, 413 pieces of cultural property were brought from Hungary on Feb. 26 and three tiles belonging to the Ulu Mosque in the southern province of Adana were brought from the Netherlands on June 9.

One terracotta female figurine and one male figurine head purchased in 2016 from an auction house operating in the French capital were also returned to Turkey voluntarily by a Turkish history buff.

These artifacts, which date back to the Middle Bronze Age, were preserved at the Ankara Anatolian Civilizations Museum last week.

In addition to these, two terracotta pots donated to the Arizona Natural History Museum in 1986 were received by Turkey's Consulate-General to Los Angeles due to their Anatolian origin.

Pointing out that these underwater finds were double-handled vessels used in the Late Roman and Byzantine periods, the experts drew attention to the fact that this type of pottery was used in the galleys of ships.

Among the artifacts returned to Turkey through the Consulate General are two amphorae of...