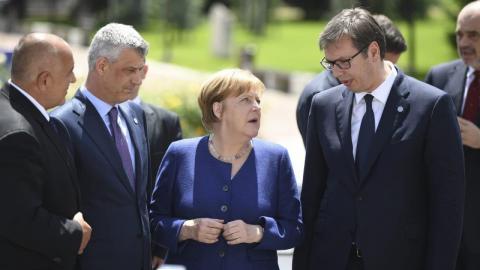 The five so-called 'Quint' countries - US, Britain, France, Germany and Italy - called on the Pristina and Belgrade governments on Tuesday to stop creating obstacles to the restart of the EU-mediated dialogue, which has been stalled since last year.

The Quint countries said in a statement that the current status quo "prevents progress on Kosovo's and Serbia's path towards the European Union (EU) and is simply not sustainable".

"After years of stagnation, the time has come to finally end the conflicts of the 1990s and provide a secure and prosperous future for the people of Kosovo and Serbia by negotiating in good faith an agreement that both sides can support," the statement said.

The Kosovo-Serbia dialogue has been stalled since last November, when the Pristina government imposed 100 per cent tariffs on imports from Serbia as a retaliatory measure against Belgrade's diplomatic moves to block Kosovo from joining Interpol.

The Quint statement said that the five Western governments want "to see the full normalisation of relations between Kosovo and Serbia via a comprehensive, politically sustainable, and legally binding agreement that contributes to regional stability".

"Therefore, we call on Kosovo and Serbia to restart the EU-led dialogue with urgency and ask that both parties avoid actions that will hinder a final agreement, which is necessary for both countries to achieve greater Euro-Atlantic integration and its accompanying benefits," the statement added.

The five Western governments said they are prepared to step up their role to support the EU High Representative who facilitates the Kosovo-Serbia dialogue.

"But we cannot do so until you both signal a willingness to compromise, remove obstacles and resume discussions,...