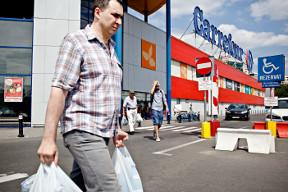 Customers leave a store in Budapest after a day of shopping. Economic growth in the 11 countries that joined the EU since 2004 is expected to double this year. [AFP]


The economies of 11 countries that joined the EU since 2004 are expected to continue growing next year. In other business news: Officials in the Western Balkans look for more ways to improve the economy.

Economic growth in the 11 countries that have joined the EU since 2004, including Bulgaria, Croatia and Romania, is set to almost double this year and continue to accelerate in 2015, The World Bank said in its EU11 Regular Economic Report. Overall, EU11 GDP is set to increase from 1.4 percent last year to 2.6 percent in 2014.

Bulgaria's central bank will remove the license of its fourth-biggest lender, Corporate Commercial Bank, after a review of the bank's operations revealed "actions incompatible with the law and good banking practices." Meanwhile, President Rosen Plevneliev said the country will seek European supervision for its banks.

Lazar Krstic resigned as finance minister of Serbia. The 29-year-old minister explained he had wanted to implement more radical reforms in public finance to control spending, but Prime Minister Aleksandar Vucic was of the opinion these were too harsh to implement.

Countries in the western Balkans should strengthen their economic co-operation, the presidents of the eight countries in the region agreed at a summit in Dubrovnik. The Croatia Forum took place on July 10-12th and its topic was "The EU Integration of the Western Balkans - State of Play."

Foreign direct investment in Romania exceeded 1 billion euros in the first five months of this year, data from the National Bank of Greece has shown. The figure represents an increase of 13.9 percent from the same period last year...