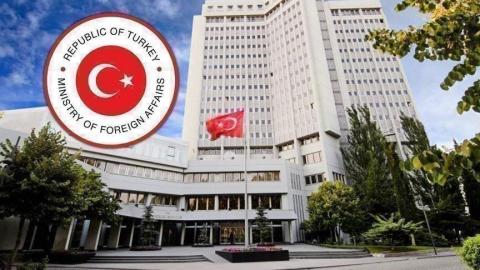 A joint declaration adopted at the end of the meeting of foreign ministers of the Southern European Union Member States (Med7) has "no value and merits" for Turkey, the Turkish Foreign Ministry said on June 15.

"The one-sided and biased approach repeated every year by this body, which advocates the maximalist claims and policies of Greek Cypriot-Greek duo on Cyprus and Eastern Mediterranean, can by no means contribute to peace and stability and enhance cooperation in the region," said a statement issued by Foreign Ministry spokesman Tanju Bilgiç.

The statement said that a genuine cooperation environment cannot be achieved in the region without Turkey and the Turkish Republic of Northern Cyprus (TRNC).

"We would like to remind once again on this occasion the proposal of H.E. Mr. Recep Tayyip Erdoğan, President of Turkey, for a regional conference on Eastern Mediterranean," it added.

Cyprus has been mired in a decades-long struggle between Greek and Turkish Cypriots, despite a series of diplomatic efforts by the U.N. to achieve a comprehensive settlement.

The island has been divided since 1964, when ethnic attacks forced Turkish Cypriots to withdraw into enclaves for their safety. In 1974, a Greek Cypriot coup aiming at Greece's annexation led to Turkey's...

Editorial: The campaign for salvation